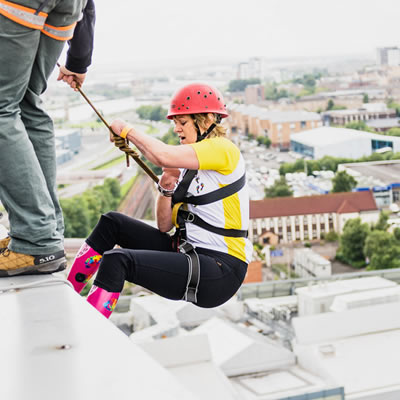 When super-fit businesswoman Cor Hutton fell ill at age 43 in June 2013 after suffering acute pneumonia and septicemia, surgeons were forced to amputate both her hands and her legs below the knee. Following her near-fatal illness, single mum Cor made remarkably swift progress, defying the odds and the doctors, walking unaided on prosthetic legs within four months. With her enormously charming, confident and charismatic persona, Cor now devotes her life to supporting others who face limb loss, by encouraging, mentoring, speaking, motivating and inspiring.

Prior to her illness, Cor was a busy small business owner, devoted Mum to Rory (then aged 4 years) and regular fitness fanatic, setting herself challenges like running marathons, cycle rides and climbing expeditions to raise money for worthy causes. She was completely out on a limb; a shadow of her former self. Her rehabilitation kicked off with her brothers breaking her out of hospital for Rory’s first day at school and she claims that ‘laughter is the best medicine’ shown by their seemingly hilarious opportunity to transport her and her wheelchair on top of Davy’s Land Rover!

Immediately following her illness, Cor set up a charity. Finding Your Feet supports families affected by amputation or limb difference through a range of sporting initiatives and social inclusion projects. There’s a huge range of opportunities to get involved with Finding Your Feet. Contact the team to find out more.

Since losing her limbs, Cor has set three world records including becoming the first female quadruple amputee in history to conquer Ben Nevis. She has learned to fly a single-engine propeller plane, abseiled off a multi-story building (with no hands), regularly attends spin, swimming, skiing and climbing classes and was chosen to carry the Commonwealth Games baton. She has written and published a book on her journey. She was the poster girl for the NHS Organ Donor Campaign but Cor believes Rory is her greatest achievement to date.

In 2015, Cor received the highly acclaimed Great Scot Award, in addition to receiving the Freedom of Renfrewshire bestowed by Lord Provost. In June 2016 Cor received a Points of Light award from Prime Minister David Cameron for her outstanding charitable work. She was a finalist for the Scottish Woman of The Year award 2016. Corinne has also been awarded an honorary Doctorate from the West of Scotland University.

Cor has received the backing of Hollywood A-listers and sports stars including Andy Murray, Gerard Butler, Lorraine Kelly, Nicola Sturgeon, Marti Pellow. Robert Carlyle, Mel Gibson, Ian Botham, Jason Donovan, Vinnie Jones and many others – all of whom have donated their signed hand-prints to raise awareness of Cor’s charity and her hope for a hand transplant. Scottish rugby star and BBC presenter, John Beattie offered the foreword for her book which was also endorsed by Michael O’Neil, Northern Ireland’s legendary football coach and ambassador for her charity.

Earlier this year in a pioneering operation led by Professor Simon Kay of Leeds Teaching Hospital, Cor received a double hand transplant, the first in the UK. Cor has led a highly public campaign to change the donor card system to include hands, and in the early days of healing she is ever more passionate about this inclusion

How does she find the motivation? What makes her keep driving and how does she cope with all the difficulties life throws at her?

“I don’t believe in looking back through the rear view mirror; nowadays I only use the windscreen. Whilst I never want to forget how low I was and how far I have come, I am determined to constantly strive for a better forward vision. I understand that to reap success in life, whether it be in business, health, home or sport, it comes down to the attitude you choose to adopt. Before my illness, I thought wealth meant a good car, house and holidays. Now my idea of what constitutes real wealth has changed entirely.”

Cor tells how she finds the strength, motivation and determination to fight through trauma and challenging circumstances to being not just as good as she was but much better, more relevant and more important than she ever was likely to be before it.